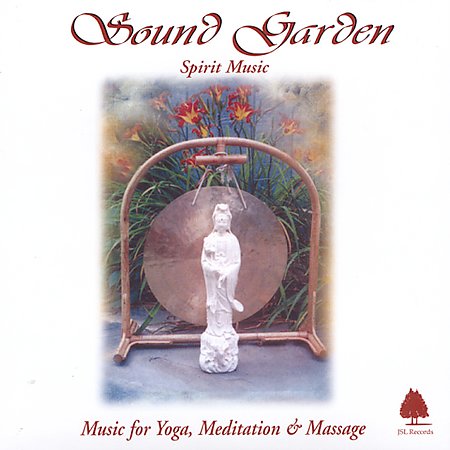 Peaceful sounds to help rejuvenate your body, mind and spirit.  Grammy winner Joe Lovano plays gongs, percussion, wood flute, bass clarinet and bass recorder while Silvano surprises by playing alto flute, alto recorder, voice and percussion.  This music is a superb companion to practices of yoga, meditation and massage as well as to create a calm energy in your home or work space.

Sound Garden ~ Spirit Music is a series of collaborations between composer Judi Silvano and master musician Joe Lovano. They both play woodwind instruments and a beautiful array of gongs and percussion instruments. Although known as a Singer and Composer, Judi plays flute, alto flute and alto recorder while Joe plays wood shakuhachi flute, bass clarinet and bass recorder.  These tracks are musical improvisations which evolved from their interwoven personal and long musical relationship.  Judi sings only sporadically on this disc and uses her voice often as an evocative acompaniment for Joe’s melodic excursions.  There is a spatial quality to this set of music, which leaves room for quiet reflection, peaceful breathing and a calm appreciation of the world around us.

Not to be confused with the thunderous Seattle-based grunge act that rose to prominence in the 1990s (that rock quartet writes its name as one word), Sound Garden play quiet and restrained music that is calming to the mind and body. Flutes, bells, and chimes create delicate tapestries of sound while a variety of percussion instruments lend subtle color to the songs.

The music is quite ambient, with a great deal of atmospheric space between the phrases, and the vague Far Eastern flavor of the sounds conjures the dreamy, observant world of haiku poetry, a parallel further highlighted by titles like “Fluttering Aspen,” “Gentle Winds,” and “Blooming Landscape.” SPIRIT MUSIC avoids sentimentality, and is a superb companion to the practices of yoga, meditation, and massage.
– AllMusic.com, Review

Sound Garden – Spirit Music  (JSL Records) is a peaceful musical journey of East-Indian and jazz-influenced music. The improvisations featuring flutes, recorders, gongs and percussion, voice, and reed instruments (such as alto and bass clarinets) are played by two veteran musicians showcasing their empathy and partnership in music and in life. The music transcended mere tunes and what otherwise might be expected from music, touching upon something actually quite spiritual.
– Laurence Donohue-Greene, Editor, All About Jazz

This is a lovely offering by a great musical couple, from their  hearts.  The music is enchanting and haunting as the candle flickers: mysterious gongs shimmer and help us float away.
– Bruce Gallanter, Downtown Music Gallery News

On previous CDs of Silvano’s I have heard, her repertoire and stylistic approach, has been decidedly contempo­rary. This time, the choice of songs draws upon the Great American Song Book and might well attract the interest of those who have hitherto been cautious.

Silvano being what she is, an intensely musical and adventurous singer, although the material is familiar her treatment of it usually brings ‘fascinating departures from the expected. In this, she is very ably supported by Abene’s charts. On these, his playing and that of the rest of the rhythm section keep things thrusting along in a very satis­fying post-bop mode. Abene apart, there are some fiery and inventive solos from the assembled horns with Jensen and Oatts especially catching the ear on the opener, / Could, Write A Book and elsewhere.

I reviewed an earlier set by this singer in JJI December 2001. This one is just as good as that, and musically is on par with Silvano’s exceptional 2003 duo album with Mal Waldron. As suggested, the choice of repertoire this time might well have wider appeal, although it is to the singer’s credit  that she is not making overt play for audience attention. Indeed, it has long been clear from everything that she has done in her career, that began back in the 1980’s, that she has too much integrity for that.

That said, if you have yet to hear this commanding singer, this might well be a very good place to start.  Good Sound: good notes by Zan Stewart.  Very well worth your attention.
– Bruce Crowther, JAZZ JOURNAL INTERNATIONAL, June 2005

“The drifting pastoralism of this music coasts along on flutes, recorders and gongs set amid a bed of bells and reverberating percussion.  A good accompaniment to a soft snowfall.”
– Jason Bivins, Cadence Magazine