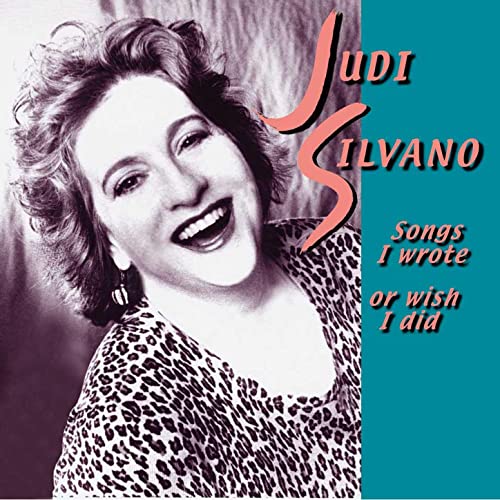 Songs I Wrote Or Wish I Did

The title says it all! This is one of the most swinging bands I’ve ever had the privilege to assemble with Vic Juris, Larry Goldings, Essiet Okon Essiet and Victor Lewis plus guest Joe Lovano! I chose some classic music of Billy Strayhorn, Thad Jones/Abbey Lincoln, Bob Dorough/Fran Landesman, Emil Boyd/Hale Smith, Jane Hall and Myrow/DeLange to record with this amazing band and was excited to record some of my own original songs and lyrics, too.

SONGS I WROTE OR WISH I DID (JSL Records) was recorded in 1999, with the great Victor Lewis on drums, Larry Goldings on organ, Vic Juris on guitar, Essiet Okon Essiet on bass, and Special Guest Joe Lovano on two tunes.

Silvano was voted in a Top Ten Vocalist in Down Beat’s Readers Poll in 2000 & again 2001 and she continues her interest in fresh material with this disc which received critical acclaim for the great ensemble playing.

Silvano chose intriguing songs by Bob Dorough/Fran Landesman, Billy Strayhorn, Thad Jones/Abbey Lincoln, Emile Boyd/Hale Smith and Myrow/Delange.  She also presents a gem of a song by Jane Hall, the little known song-writer who happens to be married to noted guitarist Jim Hall.  Add a song by Belgian composer Myriam Alter to which Silvano wrote lyrics plus five Silvano originals for a delightful program of songs to the singers’ taste.
– CDBaby


“Silvano makes the lyrics believable. She is a talented jazz singer, uncomplicated and bright.”
– MARK CORROTO, ALL ABOUT JAZZ

This is an album of original conceptions fusing Judi Silvano’s keen ear for melody and lyric.  The choice of songs and lyrics are utterly unique and interesting, too.  They bring fresh energy and vitality that she draws from powerful writers like Thad Jones, Abbey Lincoln, Billy Strayhorn, Bob Dorough,  Myrow & DeLange, and lesser known composers Jane Hall, Emil Boyd and Myriam Alter.  Further demonstrating Judi’s considerable talent is that she composed 6 of the tunes.  The prevailing theme of this album is Love with it’s many moods – happy, sad and mysterious.