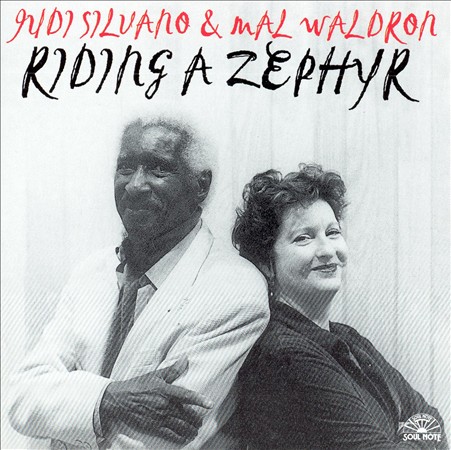 A delightful encounter between the seasoned pianist and composer who had been Billie Holiday’s last accompanist and a young, gifted vocal musician, this landmark collaboration reveals the sympatico of these two artists despite decades between them. Notable are Silvano’s original songs, her lyrics set to some of Waldron’s older compositions and their relaxed collaborative arrangements, including his classic “Soul Eyes”.

Risk isn’t a quality often associated with jazz singers, but a duet album with a pianist-composer as idiosyncratic as the late Mal Waldron could have been a kitsch fest. Yet Judi Silvano finds an alluring, noirish beauty in the somber pace and spare melodicism of Waldron’s ballads. The well-known “Soul Eyes” is here, but more enticing are vintage rarities like “All Night Through,” “A Time For Duke,” “Eyes on You” and “Finding My Love” — with lyrics by either Waldron or Silvano — which Silvano delivers with a tasteful spontaneity that unlocks the possibilities of the composer’s enigmatic language. Silvano’s honest command of pitch and jazz rhythm are key; her wordless unison with Waldron on the waltz “You” is the kind of thing that almost never works. Kudos.
– Mark Stryker, Free Press music critic

These duets were recorded in 2000 in Waldron’s adopted hometown of Brussels, and released just before the pianist’s death late last year. In a career distinguished among other things by his work as an accompanist to singers from Billie Holiday to Jeanne Lee, this is apparently his final such gig on record.

Unexpectedly free of standards, the set list is drawn by Silvano from the tunes Waldron wrote during his late-1950s stint at Prestige as house pianist, composer and arranger. Some have words by Waldron, while Silvano has written fresh lyrics for others and also contributed two (wordless) originals of her own. The respectful gesture towards a little-explored body of compositions is welcome and Silvano turns in the album’s best lyrics on “Finding My Love/Empty Street”, a pop song-blues in the vein of “Willow Weep for Me” or “Stormy Weather”.

Silvano’s not an obvious match for Waldron – neither earthy nor ethereal, her vocals have a basic plainspoken quality. Her most effective performance is the title track, a barebones improvisation of the kind Waldron thrives on, as he creeps assiduously up and down the piano over a pedal point. Here her vocals are unusually simple and unaffected. The good news is that Waldron is in excellent form throughout and the music is suffused with tremendous warmth and tenderness, despite its gloomy minor-key sensibility.
– ND, Paris Transatlantic Magazine, Nov. 2003