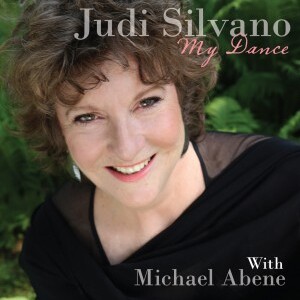 Silvano has written songs through the years and yet this is her first release where ALL of the tracks are her originals. Some have lyrics while others leave the story line to the listener’s imagination. Powerful piano by Michael Abene with Judi’s tasteful vocals in a fascinating duo session.

Silvano has been writing her own original songs through the years and yet this is her first release where ALL of the tracks are her originals. Some have lyrics while others leave the storyline to the listener’s imagination… Joining her on this duo session is the powerful pianist Michael Abene, also well-known as an arranger and conductor. Together they create a setting for each song and with Judi’s tastefully expressive vocals, this is a fascinating session.

“This is a great record by the American singer Judi Silvano, in a similarly minimal ensemble of her previous Indigo Moods trio recording. To accompany her in a kind of chamber jazz approach, is pianist Michael Abene who is rather known in the field of teaching and production. (For the last decade he has been the director of the WDR Big Band of Cologne in Germany and still teaches at KUG Jazz Institut Graz in Austria.) The two set to work to illustrate what is the “Songbook of Silvano”: this time there are no standards on the disc. It is the vision of life and love of the singer. She tells the stories in words in Make It in Classic, It’s So Amazing, Bougainvillea and Our World, while elsewhere uses only her vocal tones, leaving the listener to imagine the rest.
These two musicians are navigating together and you notice clearly what they offer each other in the chord progressions of Abene or the melodies of the singer. Her voice is so clear and inventing something all time: the art of improvisation in its essence. The rhythms used are those of jazz, including a samba imagined and blues, which is always at the base of this music. Highlights are Kokopelli’s Dance, Calypso and the final Echo Cardio, made of notes that fade amid the ethereal voice of the singer. You realize as you arrive to the end that you have listened to a brave disc, which in its minimalist essence proposes what is really jazz: two artists of great skill improvising on their instruments and while making music are really telling their stories.”
– Vittorio Lo Conte (musiczoom.it)

MY DANCE, the newest album by American Jazz Vocalist Judi Silvano, is the eleventh in her discography and entirely devoted to her own music and lyrics in a duo performance. Judi’s voice, like an exotic butterfly, soars with the melodic line and merges with it. The word “dance” in the title is clearly not accidental, as the movement of her voice is a fascinating dance and in the lyrics to “Make it a Classic” she recalls writers, composers and dancers alike. The voice and talent of Judi Silvano is part of the beauty of her surroundings that she describes in “Our World”.
– Leonid Auskern, (Jazz-square Russia, jazzquad.ru)

In 1950, Ella Fitzgerald and Ellis Larkins set a very high bar for vocal-piano duets. They explored Gershwin standards with the emphasis on ballads. Fitzgerald created heartfelt interpretations of the lyrics, while Larkins was tasteful and very supportive as an accompanist. The result was haunting and definitive renditions of gems.

My Dance, a duet project by Judi Silvano and pianist Michael Abene, is a bit different. Rather than standards, they explore 11 of Silvano’s compositions, seven of which do not have lyrics. The music is not dominated by ballads, and the two artists are very much equals. Abene’s playing regularly challenges the singer, pushing her to stretch herself, particularly rhythmically. Fortunately, Silvano has the vocal chops and imagination to make this challenging program succeed.

Starting with “Dust,” which finds her improvising off of a piano riff, she is able to create a steady stream of colorful ideas. Some of her wordless pieces, particularly the catchy “My Dance” and the soulful “KoKopelli’s Dance,” deserve lyrics that would permit them to catch on as future standards. Abene is consistently inventive and unpredictable. He never feels compelled to merely state the melody or chords, and one imagines that there are stretches where he not only kept listeners guessing but Silvano guessing, too. All in all, this is an intriguing set.
–Scott Yanow, DownBeat Magazine

Judi Silvano is a singer whose work I have enjoyed for many years. Her 11th album as a leader, “My Dance” (on JSL Records) confirms that her vocal powers are intact and her imagination as free as ever. She is one of those singers who can animate an old pop song or even cross over into classical music. But, she has always been an adventurous improviser and remains one on her new CD.
Silvano wrote all of the compositions, four have lyrics (which she also penned) and the others are wordless.
“My Dance” is a duo album. All the piano work is by Mike Abene. He has a two-handed style and it would be wrong to consider him an accompanist. He is an equal collaborator. Silvano shows that her approach is just as free on her own pieces as when she is singing the Great American Songbook.
If someone could tame “It’s So Amazing,” it could be a pop hit. Her “Calypso” is wilder than anything Harry Belafonte recorded. “Kokopelli’s Dance” is infectious with a Sarah Vaughan feel while “Echo Cardio” manages to be moving even without language.
Judi Silvano will hold a CD release show for “My Dance” with Mike Abene on Thursday, February 26th at Jazz At Kitano (66 Park Ave. at East 38th St.; (212) 885-7119; http://kitano.com). Shows at 8 pm and 10 pm and there is a $20 cover, $15 minimum drink and food per person, per set. If you miss that gig, Silvano and Abene will be at Cornelia Street Café (29 Cornelia Street; (212) 989-9319) on March 30th. Music sets at 8:45 and 9:45 pm.
-By Barry Bassis (www.theepochtimes.com)

Judi Silvano’s January release, My Dance is a joint effort with pianist Michael Abene, and the album showcases 11 original Silvano compositions.  My Dance is an album uninterested in reinterpreting classic tropes or even reimagining them. My Dance is interested in creating something new with a sound all its own, and even a cursory hearing of the disc’s opener, a track she calls “Dust,” makes it clear she has done just that. From Abene’s piano opening, through Silvano’s vocalise/scat, the album’s direction is set.
Her songs are spare. As often as not they communicate more meaningfully without words than they do with them. Silvano may come close to something conventional as in “It’s So Amazing,” but it is when she is most creative that she is at her best.
This is music that makes some demands on listeners, much the way the best jazz artists have always done. Those willing to give it a chance will find it worth their while; those unwilling will be missing out on something truly original.
-Jack Goodstein (blogcritics.org)

Across a kaleidoscopic recording career that recently entered its third decade, vocalist Judi Silvano has worked with pianoless groups, all-female outfits, a vocal ensemble performing a cappella, and even crafted, with husband Joe Lovano, an album of music intended to enhance hypno-massage. Through it all, she has only once recorded with just piano. That was a dozen years ago, for the superlative RIDING A ZEPHYR, showcasing Silvano alongside Mal Waldron.
For this sophomore duo set, which features solely original material, Silvano reunites with Mike Abene, her pianist from 2004’s LET YOURSELF GO. Abene opens the 11-track session with thunderstorm force, jagged and threatening, before setting into choppy waves to support Silvano’s angular “Dust.” It is the first of the album’s six wordless selections, each deftly mapped by Abene. Silvano’s longstanding mastery of that tricky art is shown to maximum advantage, extending from the metronomic drone of “F Minfor” to the exultant “Kokopelli’s Dance” and joyous “Calypso.”
When Silvano opts to sing actual lyrics the results are just as exhilarating: the ghostly naturalism of “Our World (Bass Space)”: the swirling intoxication of “It’s So Amazing”; the list-song finesse of “Make It a Classic,” it’s wide-ranging references to artistic hewaroees placing Van Gogh, Edgar Allan Poe and Shakespeare shoulder-to-shoulder with Ellington and Monk.
-Christopher Loudon (JazzTimes Magazine)

Vocalist Judi Silvano has always looked for the most creative atmospheres in which to use her voice, best known for her work with Joe Lovano on Rush Hour a number of years ago, she uses her creative spirit in a variety of settings. This time out, she teams up with Michael Abene on piano, who has a touch himself similar to the dark and deep sounds of Mal Waldron; together the two make a lasting impression.

All of the material is Silvanos, sometimes with lyrics, at other times with wordless vocals. Without words, she can create exotic moods as on the mood tepia toned “Dust’ or the rhythmic Brazilian joys “My Dance” and “Samba 33.” The angular and Monkian “Make it a Classic” has Abene using single notes for the melody and rhythm, while he creates a rich and chocolate texture underneath Silvano’s lyrics on “ Bougainvillea.” His fingers gently rollick like an old time strider without the stride on “Kokopelli’s Dance” and all the while Silvano is both accessible to the ears yet slowly pushing to the outside. The tensile acoustics between the two make for intimate yet vibrant atmospheres.
– George Harris (jazzweekly.com)

Compared with her last Trio album INDIGO MOODS released in 2012, Judi Silvano’s new album MY DANCE has been stripped down to just voice and piano. Ms. Silvano is able to take greater risks with her voice, making lines like pearly gossamer. She shows that she is up to the task, making sure that each note counts—each sound and each syllable as well. It is as if the singer were also inventing a new language here, or at least purging the old one that she learned as a child. Replacing words with sounds can also become retrograde. Guarding against this Ms. Silvano makes a series of left turns so to speak where she propels her songs into musical alleyways that are unusual, but then she also turns this adventure into one of great discovery. So life altering is this album that it is hard to imagine where Judi Silvano will take her artistry next.
– Raul da Gama (jazzdagama.com)

Veteran singer and composer Judi Silvano partners with pianist Michael Abene to record eleven of her original tunes. They are stories of love, life and experiences packed with creativity. Judi started her career in entertainment a modern dancer. That spirit carried over to her musical career where she improvises scatting and experimenting with different vocal patterns. Abene hugs every move in a well-coordinated effort.
– D. Oscar  Groomes , (http://www.OsPlaceJazz.com)