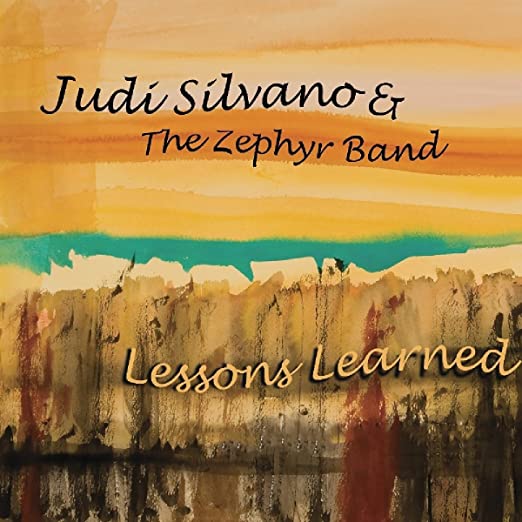 This album, released on the Swiss label Unit Records, features all Original Songs and Lyrics from the pen of Judi Silvano. Her personal observations on Life and Love speak of experiences ranging from tender to spiritual to whimsical and hilarious. The empathy of her 2-guitar Zephyr Band ensemble plus Sax Master Joe Lovano on two tracks and in the booth as Co-Producer, brings this mature compilation of songs to life.

All songs are Silvano compositions and lyrics.

Lessons Learned is an apt title for the 14th album by Judi Silvano, a vocalist and composer who draws from a wide range of experience. Her Zephyr Band — named after an early-2000s album she made with pianist Mal Waldron — has Kenny Wessel and Bruce Arnold on guitars; Adam Kolker on bass clarinet, soprano and tenor saxophone; Ratzo B. Harris on bass; and Bob Meyer and Todd Isler on drums. The album, recently released on Unit Records, consists entirely of Silvano’s compositions, some of them sharp and spiky (“Dark Things”) and others full of wonder (“Round and Round”). One subtle high point is a ballad titled “Hand and Heart,” which would seem to be a nod to her spouse, saxophonist Joe Lovano, who produced the album. “When you go into the wide world,” Silvano sings, “I feel you pulling me too. / You build fires all around you / I am standing there beside you / Holding the glow.” (Silvano and the Zephyr Band will perform an album-release celebration at her regular haunt, Cornelia Street Café, this coming Sunday.)
– Nate Chinen, WBGO.org

You know reviewing this album has taken me weeks to do because it has moved my thoughts and memories in countless directions. Judi Silvano’s words awaken so much of a life lived. I felt the need to listen to her very thought provoking lyrics extremely carefully. The album has become somewhat of an intense catharsis on a personal level whilst listening intently. All I can say is I like the album and it has now become a permanent fixture on my iPhones playlist.
– Eric Alan, AllJazzRadio, Capetown South Africa

Judi Silvano’s “Lessons Learned” sees the glass as half-full on contemplative offerings such as “Hand and Heart”, “You Will Know”, “Round and Round” and “Castle Song”. “Shuffle and Sway” has the feeling of an African-American spiritual, recalling some of Abbey Lincoln’s collaborations with Max Roach. The defiant, soulful tune is about letting go of negative things that aren’t working. Many jazz vocalists shy away from composing original material, but Silvano is not one of them. She is as skillful a writer as she is a singer and Lessons Learned, like My Dance four years ago, is a fine product of both.
– Alex Henderson, NYC Jazz Record, November 2018

Silvano has been at the forefront of innovative jazz singing and as a gifted songwriter, Silvano has written words and music for all 10 songs heard here. These songs draw upon aspects of the composer’s own life and can be understood and appreciated by the listener who is thus far from being an outsider. Silvano’s sound is warm and mature, bringing to these songs depth and hints of melancholy that are counterbalanced by hope. Some of the lyrics are gently musing, some wryly witty; all show understanding of different aspects of the human condition. Without question, this singer-songwriter has succeeded in her ambitions for this excellent set of contemporary music.
– Bruce Crowther, Jazz Journal UK

Judi Silvano has always been an adventurous jazz singer, even when she is exploring standards. Lessons Learned features Ms. Silvano not only as a singer but as a composer who wrote all ten songs, both the music and the words.

For the project, the singer leads the Zephyr Band and her use of two guitarists with contrasting sounds is inspiring. The songs include “Round And Round” (a hypnotic and powerful piece that does have a circular feel to it), the well-titled “Dark Things” which has some wild guitar and a repeated staccato melody, the quirky waltz “Castle Song,” and the extended and somewhat dreamy “Riding A Zephyr.” The bass clarinet adds to the atmosphere whenever it is heard (most notably on “Dark Things” and “After Love”) and the two dance pieces “Shuffle And Sway” and “The Music’s In My Body” are joyfully eccentric.

All ten selections should be heard several times for there is a lot occurring that is worth discovering. The musicians sound inspired and constantly play off of each other, taking the music in surprising directions. Judi Silvano sounds very much in prime form no matter how adventurous the music becomes. Lessons Learned is easily recommended and one of Judi Silvano’s finest recordings to date.

Judi Silvano’s songs have elements of jazz, rock and other genres with a heavy reliance on guitars and her voice is mature, rich and melodic. Sax master Joe Lovano adds percolating life to a calypso groove “Dust” and an impassioned solo on an extended piece while Silvano croons impressively on “Riding a Zephyr”. This album is full of energy and joy and her musical partners bring flexibility and imagination to varied settings, with Bruce Arnold’s and Kenny Wessel’s intermingled guitars a consistent highlight. This is fun stuff from a singer who should be more celebrated!
– Jerome Wilson, AllAboutJazz.com

Judi Silvano’s “Lessons Learned” has moved my thoughts and memories in countless directions, her words awakening so much of a life lived. After careful listening to her thought-provoking lyrics, all I can say is the album has now become a permanent fixture on my iPhone playlist. – –Eric Alan, alljazzradio/co.za/blogs-and-reviews, So.Africa


The album “Lessons Learned”, recently released on Unit Records, consists entirely of Silvano’s compositions, some of them sharp and spiky (“Dark Things”) and others full of wonder (“Round and Round”). One subtle high point is a ballad titled “Hand and Heart.”
– Nate Chinen, WBGO.org

Again and again, Silvano breaks out of the well-established waters of vocal jazz. On her new CD “Lessons Learned” Judi Silvano erupts once again with some thoughtful and lyrical Songs and lets her Zephyr band, including Joe Lovano on “Dust” and “Riding a Zephyr”, improvise freely.
– Concerto Magazine, Switzerland, November 2018

As a respected vocalist, who has four times been named a DownBeat Top Ten Vocalist and Composer, Judi Silvano continues using her composer skills to share life stories that encourage people to recognize that all of humanity is connected. On “Lessons Learned” Judi Silvano has composed all the songs both music and lyrics. I appreciate her songwriting ability and her lyrical messages and as a social message, it is cerebral food for thought. As a composer, Silvano soars.
– Dee Dee McNeil, August 1, 2018

My Dance came as a surprise to longtime followers of singer Judi Silvano in 2014. More than the fact that her only accompaniment was pianist Michael Abene (of WDR Big Band fame) was that Silvano was performing exclusively original material. Although Silvano had included original songs on previous releases, familiar standards were often used as vehicles for improvisation. Silvano the composer takes center stage once more with Lessons Learned.

The singer’s more abstract side asserts itself on the funky yet angular “The Music’s in My Body” and “Dark Things”, which employs a choppy, punk-ish beat. This is a consistently introspective album and the latter tune finds Silvano examining some darker thoughts.

But more often than not, Lessons Learned has an optimistic outlook; Silvano is definitely seeing the glass as half-full on contemplative offerings such as “Hand and Heart”, “You Will Know”, “Round and Round” and “Castle Song”. “Shuffle and Sway” has the feeling of an African-American spiritual, recalling some of Abbey Lincoln’s collaborations with Max Roach. The defiant, soulful tune is about demanding positive changes in one’s life and letting go of negative things that aren’t working.

Silvano achieves a healthy balance of the melodic and the cerebral. Many jazz vocalists shy away from composing original material, but Silvano is not one of them. She is as skillful a writer as she is a singer and Lessons Learned, like My Dance four years ago, is a fine product of both.
– Alex Henderson, NYC Jazz Record, November 2018

Once again, the jazz vocalist finds that sweet spot between art chick and hard core pro as she delivers a real personal album assessing where she is in life now. Lyrically loaded with lessons all should really be thinking about, this is a Zen jazz set that’s sure to resonate with the current crop of seekers that are trying to take pause and figure the rest of it all out.
– Chris Spector, August 2018, Midwest Record Review

Judi Silvano is a universal artist in a special class. She is a musician, singer, lyricist, dancer and painter. With “Lessons Learned” she surprises us with a graceful pop-jazz sound with multiple effects. First, the messages of some of her songs cheer up her fellow human beings, pushing for the positive. Her poems are expressed in catchy melodies which are broadened by the top jazz players she has in her octet. She has been married to an absolute superstar on the tenor saxophone, Joe Lovano, so asked him to produce this album and he helped his wife to realize these songs which have influences of folk, spiritual or Latin styles. For instance, “After Love” features Adam Kolker (bcl, ss, ts), who worked for years with the famous conguero Ray Barretto. Also, there are 2 guitarists in the band, Kenny Wessel and Bruce Arnold which is a really special thing about this CD. Wessel, who played in the ensemble of Ornette Coleman, and Bruce Arnold, who plays jazz and interprets contemporary classical music, collaborate well together, which generates an exceptional sound. The rhythm is provided by the trio Bob Meyer (dr), Todd Isler (perc) and Ratzo B. Harris (b). Judi Silvano herself has presented jazz with poetry in several projects, has recorded classic songs with unusual ensembles and has founded several successful vocal ensembles. Again and again, Silvano breaks out of the well-established waters of vocal jazz. On her new CD “Lessons Learned” Judi Silvano erupts once again through the civilized channel of pop-jazz with some thoughtful and lyrical Songs and lets her Zephyr band, including Joe Lovano on “Dust” and “Riding a Zephyr”, improvise wildly through the studio.
– Concerto Magazine, November 2018, ewei

The American jazz singer Judi Silvano has such luminaries as the guitarist Kenny Wessel, the bass clarinetist Adam Kolker and tenor Master Joe Lovano who also produced the album of her Zephyr Band. You can therefore assume that she has a formidable reputation on the scene. In sometimes sprawling pieces (“Riding A Zephyr” takes about twelve minutes), Silvano shows her world views with a playful openness reflected in pastel shimmering soundscapes that are created by two guitarists of which the second is Bruce Arnold. Silvano sounds affectionate and spiritual on some of her songs while in others she exhibits a wild abandon. Seldom have we heard a singer being so open and direct, not imitating other singers but singing in her own style. Her voice has an honest and very authentic sound, not spoiled by academic rigidness in spite of many complex passages in her very expressive music.
– Text Rolf Thomas, Jazz thing 125 (Germany)