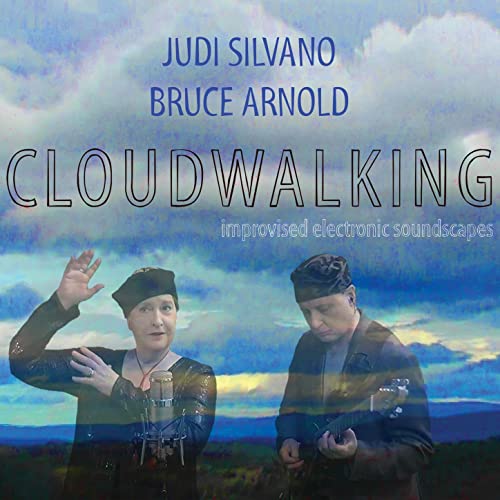 This is a beautiful collection of gentle and atmospheric sound excursions. A very relaxing second album for Judi Silvano and Bruce Arnold’s Sonic Twist duo, here they create 12 free form yet melodic duets. Creating each unique composition ‘in the moment’, both use electronics and effects tastefully. “What a beautiful collaboration of voice, guitar and electronics.  Thank you Judi and Bruce, for the lovely journey!” Jay Clayton, singer/composer

“This is the second disc from Judi Silvano and Bruce Arnold. To call Ms. Silvano just a jazz singer would be misleading since, as this disc shows, there is quite a bit more going on here than one might imagine. We can still hear her jazz background but she is still stepping into another world, rather mysterious sounding. Her voice on “Ingenue” is lovely, warm, dreamy sounds without words. Mr. Arnold also plays solemn, spacy echoplex guitar chords underneath. Ms. Silvano selectively uses an ample amount of echo effects to expand the sound of her voice.

The effects that both musicians use are similar in the way they pulsate and work well together. The effects that Mr. Arnold uses add a hypnotic groove at times upon which Mr. Silvano lets her voice glide, rhythmically, tastefully.

There is some magic spice going on here, a rather soothing, dream-like vibe that feels better that some of the more aggravating nonsense we all have to deal with at times. Is this music for a fairy tale or a quaint movie for our minds when we are mellowing out?

I like when the voice lays out for a bit while Mr. Arnold creates enchanting scenes from different short stories or chapters in a novel. This gives Ms. Silvano a chance to add her own part of the story, her creating different characters. Since there are no lyrics to think about, it is only the sound of her voice to evoke different feelings.

Overall, I find this disc to be rather charming and not too far out, but enough to take us all on a magic carpet ride upwards and onwards. This duo will be playing here at DMG early next year, so keep you eyes & ears peeled.”
– Bruce Lee Gallanter, DMG

“From her first recordings in 1989, Judi Silvano has always been an adventurous improviser and yet Cloudwalking is quite a bit different.  Ms. Silvano improvises a dozen free form yet melodic duets with guitarist Bruce Arnold while both musicians utilize electronics and effects tastefully and spontaneously. Nothing was added later on during mixing.

The music is quite impressionistic with sound explorations and subtle surprises. The singer displays a wide range of notes and emotions while also making creative use of space and having an unhurried delivery. Bruce Arnold is right there with her, sometimes leading the way while at other times following her musical ideas with his own musical adventures.

One should not come to Cloudwalking expecting swinging jazz but instead should be open to mood music that conveys an optimistic feeling.
— Scott Yanow, LA Jazz Scene, February 2019

“What a beautiful collaboration of voice, guitar and electronics.  Thank you Judi and Bruce for the lovely journey!”
-Jay Clayton,  Singer, Composer, Educator

Jazz singer Judi Silvano is the wife of tenor saxophonist Joe Lovano and she has appeared on some of his Blue Note albums, including Viva Caruso (2002), Celebrating Sinatra (1996) and Universal Language (1992), with a rather operatic vocalese style.

Silvano began recording under her own name on Blue Note with Vocalese (1996) and then with her own JSL Label which has released several albums including Songs I Wrote or Wish I Wrote (2000), Sound Garden: Spirit Music (2004) and Sound Garden: Celestial Voices (2005). Somewhere along the way Silvano switched to a straight vocal style without either vocalese or perhaps only a dab of scat..

Women’s Work: Live at Sweet Rhythm is based on a concept to present songs written by women and presented by an all femme group. This album has been carefully planned, and represents a concept of femininity in jazz writing and performing, and is well-realized in both planning and execution. The songs are composed by writers including Mary Lou Williams, Abbey Lincoln, Sheila Jordan and Carla Bley, plus two Silvano originals and one from pianist Janice Friedman.

Of the players, and they are all good, it’s Friedman who provides the cement that really holds this group together with her solos, comping and altogether solid playing. Allison Miller, who plays in many different genres, is a creative drummer.

Recorded live at Sweet Rhythm (formerly known as Sweet Basil), the opening tune, Silvano’s “Bougainvillea” has appeared elsewhere in her discography. Williams’ “Pretty Eyed Baby” is reminiscent of a tune that Nat King Cole might have recorded with his trio and is a fine jump composition. Blossom Dearie’s “Inside A Silent Tear” was heavily recorded during the 1970s, and Meredith D’Ambrosio’s “Why Do I Still Dream of You” is a touching ballad, and let’s face it—when have you ever heard any jazz vocalist cover D’Ambrosio’s work?

Likewise, Silvano covers Lincoln’s “Not to Worry,” Jordan’s autobiographical “Ballad for Miles” and Bley’s humorous “Can’t Get My Motor to Start.” She concludes with Bessie Smith’s “Backwater Blues,” a song that defined Dinah Washington’s 1950s output. Did Silvano take too much of a chance here? Well, it doesn’t beat out either Smith or Washington’s version but it elongates the song into a pleasing six minutes of pleasure.

Women’s Work: Live at Sweet Rhythm is the best of Silvano’s post-millennium albums. It presents a hardworking quartet making fine music so that whether in tribute or not, these eleven tracks present a well-developed and fun approach to a conceptual overlay.