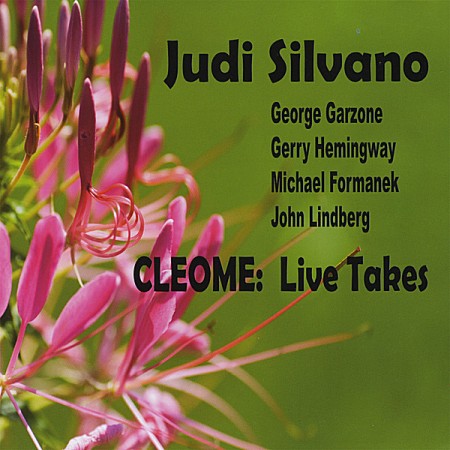 This is a joyous collection of Live Recordings from gigs that Silvano booked in New York with well-known NYC downtown musicians in the early 1980’s. Her regular colleagues during this period are saxman George Garzone, drummer Gerry Hemingway, and bassists Michael Formanek and John Lindberg. Together they explore new compositions and traditional songs in the spirit of collective improvisation at various venues, rather than in a studio setting.

“Judi Silvano has long been recognized as one of the most innovative vocalists of modern jazz. Her studies of flute and dance have clearly informed her approach to phrasing and movement in performance and composition; her associations with some of today’s more inspired artists such as Bill Frisell, Kenny Werner, Charlie Haden and Joe Lovano also have provided opportunity to explore improvisation from an instrumentalist’s perspective. That perspective is on full display on Judi’s new CD, Cleome: Live Takes, a set of mostly original compositions and Judi’s enthusiasm for composition and spontaneous improvisation is readily apparent.”
-Andrea Canter, JazzInk

Vocalist Judi Silvano has guts and takes big risks: singing in the new music arena, creating original material and functioning as an instrument in the ensemble. Her working band circa 2000 – with reedman George Garzone, alternating bassists Michael Formanek and John Lindberg, and drummer Gerry Hemingway – provide a solid yet malleable platform for Silvano’s high dives.

She often sings wordlessly, with octave-jumping flexibility and rhythmic snap.  Silvano, a soprano, likes to sing in unison with the instruments; she’s smart enough to vary her timbre and attack.  Against Formanek’s quicksilver, microtonal arco work on  “Bougainvillea,” her voice becomes liquid.  On “Yapi Credi”, she affects an altered state while the boppish, fleet “Boscarob” has her scatting the head with Garzone’s tenor and there is an extended bass and drum exchange.  Sun Ra’s “Love In Outer Space,” from his Saturn period, is a spacey waltz, taken at a fluid tempo.

These are a series of audio snapshots of Silvano and if these candids are raw, they are exciting in their spontaneity.
– Kirk Silsbee, Down Beat Magazine, Nov. 2008

Nothing in vocalist/flutist/songwriter Judi Silvano’s vibrantly eclectic, postmillennial oeuvre – not her knock-out pairing with pianist Mal Waldron on 2002’s Riding a Zephyr, not her sublime wade through the Great American Songbook on Let Yourself Go; not her back-to-back ventures in the new-age realm with Spirit Music and Celestial Voices; not even last year’s superb foray into an all-female world of performing and composing, Women’s Work – can prepare fans for the explosive experimentation at the heart of her latest disc.

Designed, as the title states, to celebrate various live takes by Silvano and her then working group (clarinetist and saxophonist George Garzone, drummer Gerry Hemingway and alternating bassists Michael Formanek and John Lindberg), the disc is a smorgasbord of outré treats.  Or, more aptly, it is a Cleome: a genus of spider plant raised by Silvano in her Hudson Valley garden, known for it’s brash, showy flowers with many, divergent tendrils.

There’s the loose-limbed, dervish-esque title track “Cleome,” the cacophonous, quasi-robotic swing at the core of “Boscarob,” the reinvention of Silvano’s “Bougainvillea” (from Women’s Work) as a haiku-delicate tone poem, the menacing Middle Eastern stealth of “Yapi Credi,” the ghosts in the machine of “Cocolalla Land,” the money-in-orbit tumult of Sun Ra’s “Love in Outer Space” and the regal chant of the Japanese folk song “Sakura.”  All are bracing, all demanding of wide-eyed attention (no casual listening here), all immensely daring and all disturbingly brilliant.
– Review: JazzTimes.com, November 2008

Judi Silvano’s improvising quartet, Cleome, dares to push with a unique air as her voice melds with the ensemble’s three instrumental sounds in an uproar of motion. Making its flexible journey through space and revealing her extended range, the leader’s voice pierces like a soprano bullet that ricochets through the room in random patterns. Her vocal arrangements make musical sense, however, as she carries each melodic pattern in partnership with saxophonist George Garzone in an outré display that wraps bass and drums around their central focus. Two pieces have lyrics, one sends an instrumental message through Silvano’s effective alto flute rendering and the other portions of her program rely on exciting wordless vocals.

Originally from Philadelphia, Silvano studied classical piano, flute and modern dance at Temple University. After graduation, while pursuing a dance career in New York, she studied composition and arranging with Bob Brookmeyer. It was at a time when Joe Lovano worked with the Thad Jones/Mel Lewis Orchestra that she and Lovano met, later married and turned their sights toward making creative music together. He’s listed as executive producer for this project and recorded half the program.

Silvano puts lyrics to work on three of the album’s nine songs while concentrating on vocalese for effect. She’s strong in both areas: delivering wordless phrases that jump out at you candidly and interpreting lyrics with a sentimental poetic license. Garzone matches her timbre on clarinet, soprano and tenor saxophone while sharing in each unpredictable adventure. Employing his tenor on “Boscarob,” for example, he digs in with woeful moans that express the same kind of anxiety that the singer hatches up front. It’s here that bassist Michael Formanek and drummer Gerry Hemingway toss in their best fireworks to suit the occasion and give Silvano a welcome ride. Working together seamlessly, Cleome is a unique program filled with animated surprises, woven together masterfully.
– Jim Santella, All About Jazz, October 2008

“CLEOME: Live Takes is Judi’s Best yet!”
– Laurence Donohue-Greene, Editor, All About Jazz

I can’t stop listening to your new CD.  It has so much life in it.  The new CDs by singers I hear seem so sterile and over produced, and the musicians always seem like they are playing it safe.  On your CD everyone including you is just ‘going for it’ the whole time.  It is the real deal.  It reminds me why we got into this music in the first place!
– Dave Morgan, bassist, arranger, faculty Youngstown University, OH

Everyone I know who heard your gig the other night was really knocked out by your tunes from Cleome, everyone’s playing and especially the way the group played together.
– Adam Kolker, Woodwinds, West Side Story (Broadway production)